Okay, readers, I need a lil something, something…a lil encouragement from you to help me get my goal list done this week.

I still have not de-cluttered my kitchen cupboards a second time, and I only have two more nights to do that. I have meetings tonight and Wednesday, so really that leaves Tuesday only to accomplish this goal.  Yikes! I could stretch it out until Thursday night, and do my reporting on my goals later in the day on Thursday.  Hmmm, should I though?  Will I be able to get ‘er done?

I also have not yet researched writing resources for the future.  I do have some time this afternoon to do that, so maybe I can get one or two done today.

I have made a Gratitude List I’ve been adding to as I go along this week.  You can check that out here.  I think in tough times it is triple hard to think positively, so the list is helping me get there.  I will continue adding to it until Thursday, when I report my progress.

I’m a little pressed for time lately, but I love to reach out to my readers and sharing some of what I’m experiences is a stress-reliever for me. That being said, I wanted to pop in here this afternoon to say that I’m thinking about my list, and  you, and planning to do as much as I can to complete it before Thursday.  Oh, and I wanted to share some pics I took recently.

This is Northeast PA in all its glory. Enjoy!

A pond adjoining our property…

The view from the top of my driveway…

A lake just around the corner from us…

A misty morning outside my front door… 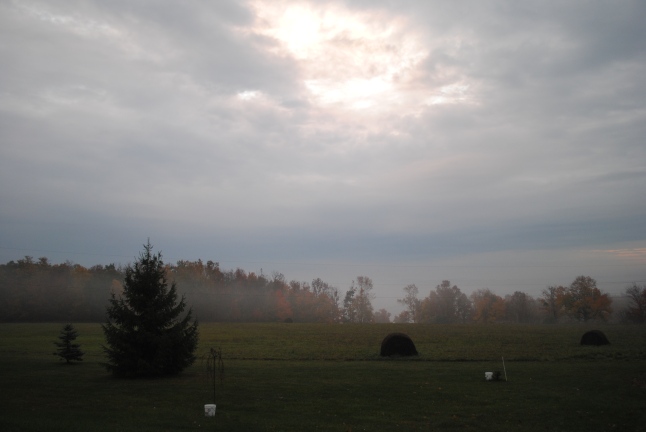 Flowers on my front porch that survived the early frost… 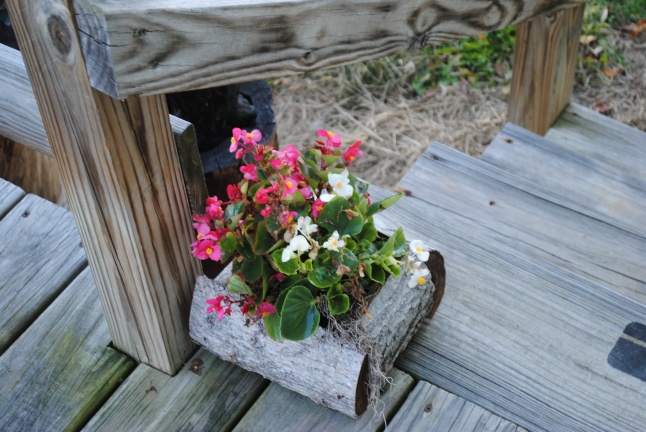 What do you think, can I get my goal list done this week?  What goals have you set for yourself this fall?

For my Friday post this week I thought I’d share some of the splendor I see outside my front door in God’s country.  Let’s begin with the big sky pictures.

How amazing it that?  And then there was this…

We got three new trees this summer, so hubs has been babying them along with their own dedicated water troughs.  He took a 10-gallon paint bucket and drilled a hole in the bottom side of it. He fills these every night, which allows a slow, steady, even water stream to escape above the tree root ball over the span of a few hours.  We will be removing these soon, and putting some bark chips at the bottom of the tree to protect it this winter, then encircling the trees with fencing. We have a momma deer and two babies that get the munchies in the winter and regularly come to our yard to satisfy their cravings.  Darn, deer, anyway! 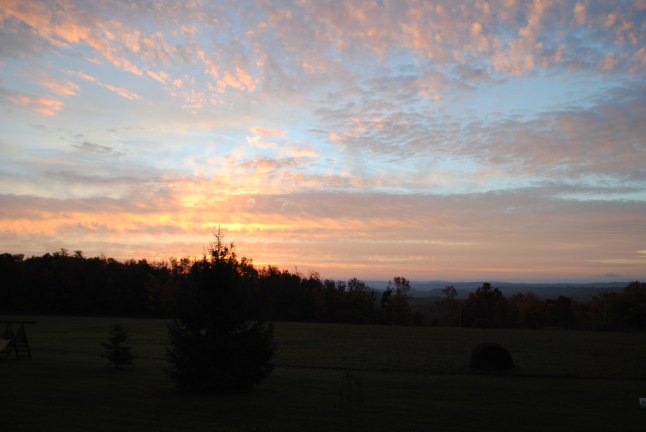 The sun rising over NEPA is indeed a gorgeous sight.  This beauty of a sky predicted rain and it came later in the morning. What is it the sailors say?  Just this, “Red sky in morning, sailors take warning. Red sky at night, sailors delight.” 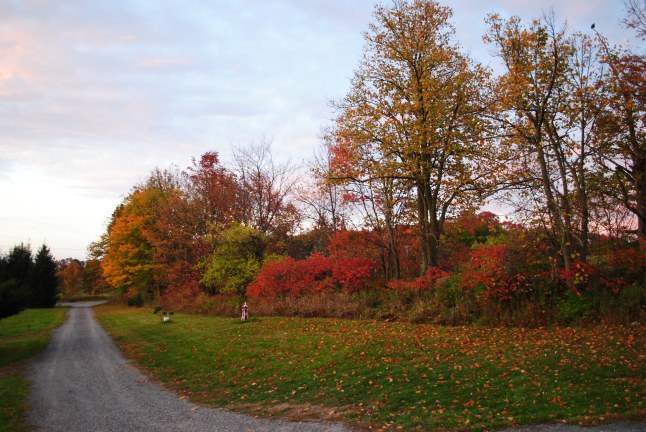 My gorgeous autumnal driveway.  On the upper side of it that third tree hubs has been babying along, and our light house set atop our well head.  Just the other side of the road from this spot is our old donkey, Rosie, and two riding horses that belong to my sister-in-law. She is lucky enough to live on a plot of land adjoining our pasture, so has benefited from the green grasses that grow there almost all year long.

I love my camera. What a great shot!

A red sugar maple growing at the end of the house.  Yeah, she’s braggin’!

I wish the fall colors could march on and on, but I know winter white is headed our way soon so I’m enjoying these crisp cool mornings as much as I can.

What is it like where you live?  What do you love most about the fall?

Sometimes, the best thing you can do is remain silent!

Duct Tape is our way in NEPA.

Because this is how we do it in NEPA…

…with double rainbows, all the way!

It is wet, wet, wet, and wet in NEPA this morning.  It’s been raining all night and is continuing today.

The Good News?  It’s not snowing in NEPA today! Woohoo!!!!

How is the weather in your part of the world?  Please share, and tell us where you are living when you do. 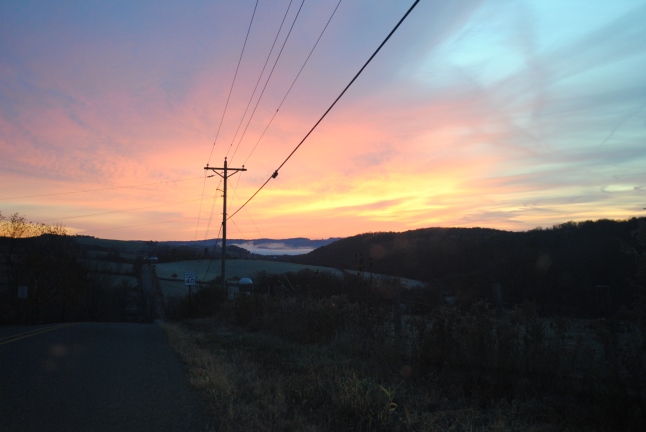 Part of my Tuesday morning commute in God’s Country.

These pictures were taken from my car, while I was driving.

Disclaimer: Pictures should not be taken from car while driving in heavily populated areas.  Don’t try this at home.

Exception:  Pictures may be taken while driving in cow country.  Ask any farmer, they will tell you that folks from Bradford County are multi-taskers and pretty darn good drivers.  😉

Besides, I couldn’t let the opportunity to capture this sunrise slip away, not when I had my camera with me.

I usually hate driving to work in the fall/winter, because the sun is “in your face” the entire time. There have been days when I couldn’t see a foot in front of me, as I tentatively toured over the top of a ridge on some lonely country road.  Good thing the road was lonely. Scary!

Tuesday the traffic was at a minimum, and the red sky at morning was spectacular. I only wish my lens could capture what the human eye sees. Then you would know how truly blessed I am to live in NEPA!

What’s that they say about red sky at night?  Sailor’s delight!

Luckily, no sailors live in our neighborhood!

Have you ever snapped pictures while driving?  What do you see when you look out on your favorite vista? 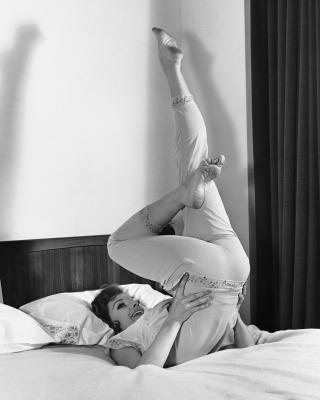 Is it okay to exercise in bed?

That’s the question I had to ask myself this weekend. Can I stay in bed and call what I’m doing exercise?

For me, I think the answer is, Yes!

And no, I did not have a partner joining me in this exercise routine.  😉

Hubs was up and out early this Saturday, making making the bed an exercise that was a whole lot less synchronized, but a job that I needed to complete before beginning my nine minutes of morning movements in bed.

I left the lights out while I exercised.  I often do that in the morning. Just because I’m moving, doesn’t mean I have to wake up yet, right?

The dark environment of my bedroom, and the cushioned base for my exercise routine this weekend, meant that I stayed at it longer and enjoyed it more.

Sometimes, I just want to put off getting out of bed in the morning.  Anyone else feel that way?

The downside of exercising in bed was that I fell back asleep after my routine was finished, and that caused me to get a late start when leaving the house.

Poor hubs, his early departure was followed by an errand of mercy, as he helped a local micro-farmer neighbor pick produce from a rather large garden before picking grapes, so that all the harvest that could get in was gotten in before the big frost this morning.

Yep, our snow before Halloween tradition is left intact.

Big, white flakes of that frosty stuff came down for about thirty minutes. And that, only an hour after I told Hubs he really needs to mow the lawn at least one more time before winter begins in earnest.

I saw this picture on facebook today, and snickered:

Do you ever exercise in bed?  If so, how much of a sweat do you work up in your work out?